Evolution of Pairing: How it started 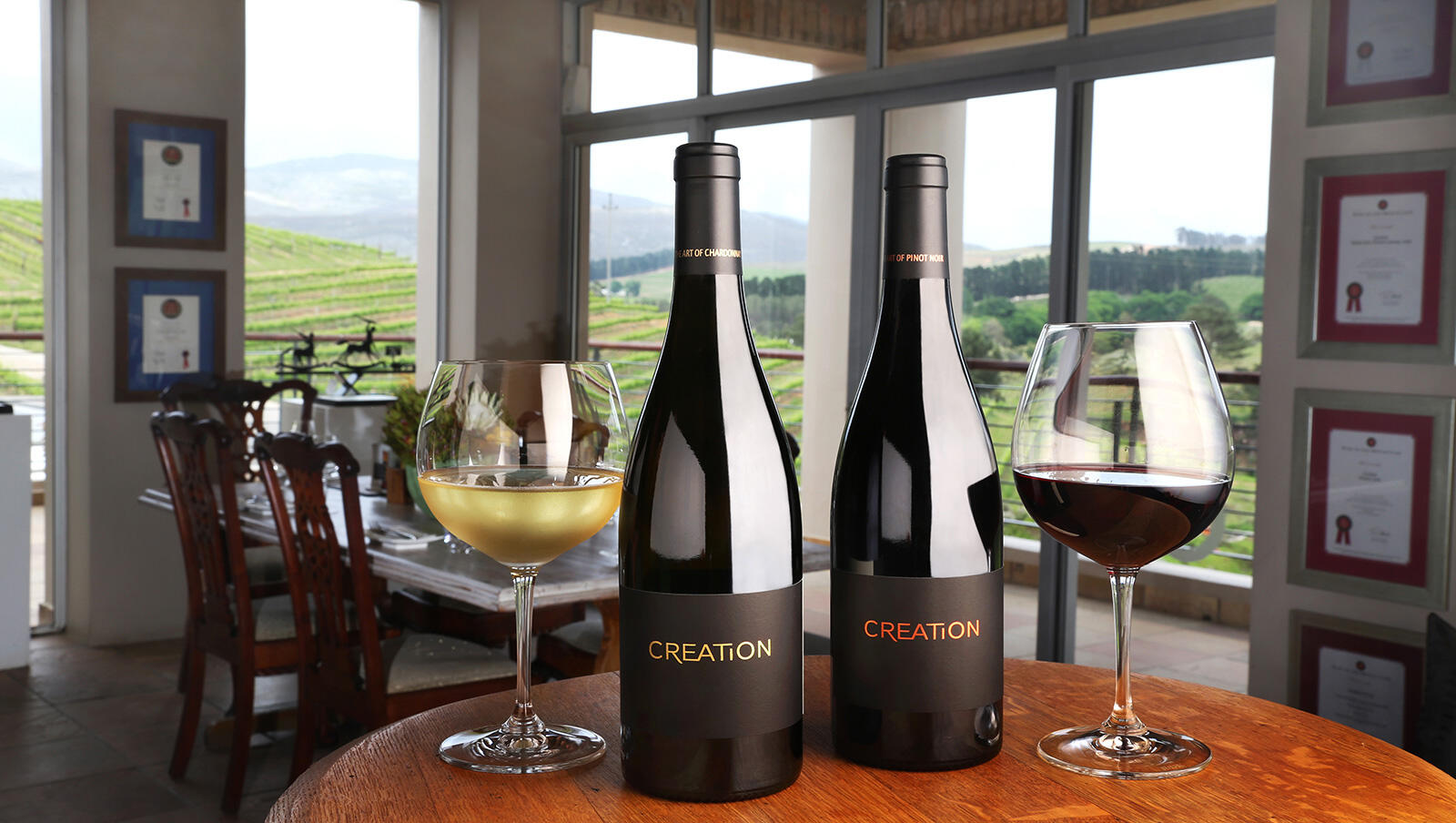 Since its inception in 2002 Creation Wines has held innovation as one of its defining principles. While this has led to a range of wines characterised by rare elegance, distinction, balance and finesse it also gave rise to the award-winning Canapé and Wine Pairing concept, a first for a South African wine estate when launched in 2009. Since then Creation has developed a myriad complementary wine and food pairing experiences: the Secret Pairing, the Paradoxical Chocolate Pairing, even a Tea and Canapé Pairing for non-drinkers. All in a world class venue: our cellar and tasting room, set amidst the vines, perched high up on the Hemel-en-Aarde Ridge near the coastal town of Hermanus.

Many of the over 40 000 visitors we were privileged to welcome to Creation last year commented on the ingenious combinations of flavour and texture that complement our wines so perfectly, and wondered how we manage to come up with the sometimes unexpected (but always delicious) pairings. Carolyn Martin (née Finlayson), co-owner and marketing director, is the wine and food pairing guru at Creation Wines and firmly believes that there is no formula and very few unbreakable rules when it comes to finding the perfect match. All of which makes pairing a somewhat esoteric art, one which relies on experience and intuition as much as a willingness to try new things.

Carolyn has always been an early starter. Born at the gates to the family farm in a red Ford Anglia, she was delivered by her father, Walter Finlayson, who had delivered many a calf from his Ayrshire herd but never acted as midwife before. Carolyn simply couldn’t wait to get out into the big wide world to make her contribution! Growing up on Hartenberg, a working farm and vineyard, Carolyn developed a natural love for food from a young age, nurtured by her legendary grandmother, Eleanor.

“She cultivated all manner of fruits and vegetables, even pawpaws and Seville oranges,” says Carolyn.

“Almost everything we consumed was grown or made on the farm. The only things we bought in were flour, oil, sugar, condensed milk and ice cream. We had a fantastic pantry, our own chickens, pigs and cows with a dairy. We cultivated different fruit orchards, and of course we had the vineyards. This is where I learnt to appreciate fresh, simple food; it’s also where I learnt to cook, in Ouma’s kitchen. I’d bake fresh goodies for the people in the office each day from age five.”

Carolyn also conducted her first wine tasting at the age of five when she was unable to find her Grandma to attend to visitors.

“I knew the guests had to be taken care of, and I reasoned that I’d heard enough to get by. Eventually we found Grandma half way through a cellar tour!”

It is this rural existence that shaped her deep rooted love for, and intuitive understanding of flavours, which in turn helped the Tasting Room at Creation evolve into one of South Africa’s most exciting destinations for wine pairing.

Carolyn maintains that ‘what grows together goes together’. “That’s why we source 80% of what we serve from within 50 km of the farm. We have our own herb garden and we use raw wild harvested bee pollen from a local beekeeper and the chef regularly pops up the road to our mushroom supplier.”

When Carolyn was seven years old the family moved to Stellenbosch, to the farm Blaauwklippen which Carolyn’s father Walter developed into one of the premier estates in South Africa. Carolyn notes that it was here that the family first offered cheese platters and charcuterie to guests enjoying a wine tasting, a concept that was introduced at the Tasting Room at Creation when it opened in 2008. Carolyn fondly recalls how her mother would take charge of the rowdy university students when they arrived for tastings and credits her time at Blaauwklippen with teaching her how to manage and enjoy the guests.

Carolyn went on to study at the Michaelis School of Arts at the University of Cape Town, where she studied design, writing her thesis on champagne. It was here, and afterwards working for Knox and Partners and JWT that she explored her creativity, equipping her with the skills that have helped establish the Creation brand in record time. At the age of 22 she realised that she needed to spread her wings and experience new challenges, prompting her to move to London.

Here Carolyn was employed by Europe’s largest financial communications company, a position that required an understanding of how different cultures interact, but also highlighted the importance of integrating PR, marketing, advertising, design and lobbying in the business world.

“Moving to London and working on functions for the great and the good prepared me for what happens in the tasting room now,” says Carolyn. It was with these skills that Carolyn launched her own design company in London, focusing on brand development through innovation, working with globally recognized brands such as Laurent Perrier, Endemol and 3M. During this time she pioneered canapé and wine pairings, serving petit fours from La Gavroche with the famous botrytised wines of Tokaj, or Scottish salmon gravlax and caviar with Laurent Perrier champagne.

In 1998, doing the global rebranding for her father’s Glen Carlou wine estate, Carolyn met Jean-Claude Martin in Switzerland, presenting to the Hess Group in Bern. The irony was that JC had worked a harvest at Glen Carlou in 1995, when Carolyn’s parents were convinced that they’d met the man for her… but Carolyn insisted that she would never marry a winemaker. They were married a year later on St Peters Island (Jean-Jacques Rousseau’s refuge) on the lake of Bienne after which her mom told her it was the same guy she had spoken about 4 years earlier! 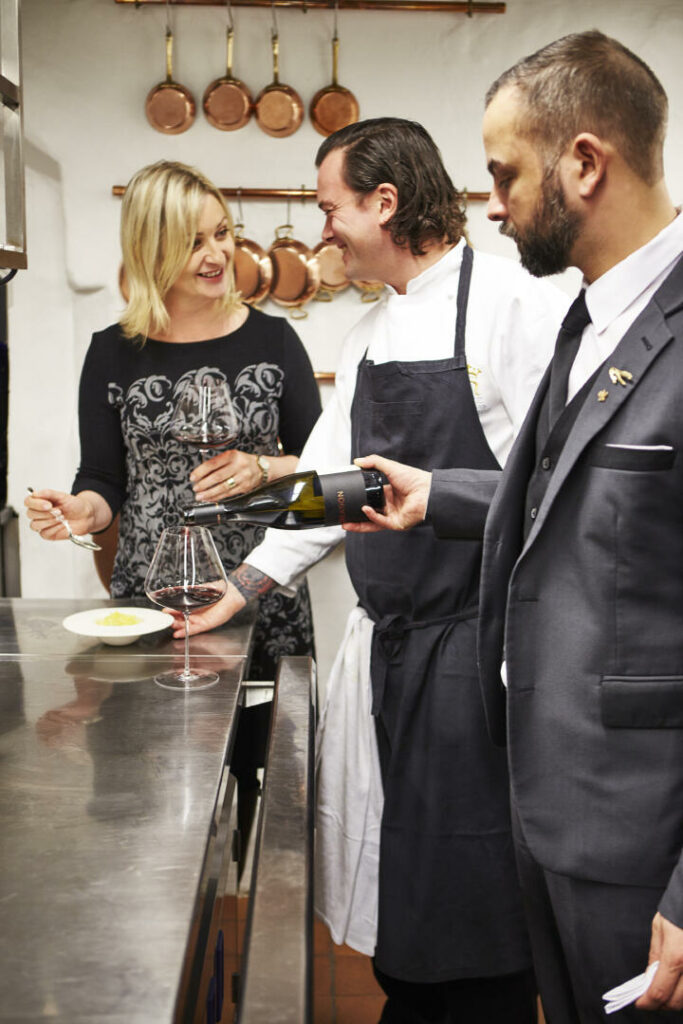 While Carolyn and JC were visiting her uncle Peter Finlayson on a beautiful summer’s evening in 2002, supposedly for a fish braai, Carolyn saw her uncle’s Landrover disappearing out of the gate. Upon their return JC proudly announced that he had just bought a farm in the Hemel-en-Aarde. The next day when JC took her to view the farm she was shocked to find it had no electricity or municipal water, not even cell phone reception – just a few sheep.

This is where the story of Creation begins, but it’s clear that the journey towards the evolution of pairing started years before when Carolyn was growing up on Hartenberg. The places, people and experiences that she encountered along the way have served to bolster the intuitive marriages of wine and food that can be enjoyed at Creation today.

Chefs bring back the stars

Rack of Lamb and Chakalaka