Pinot Noir – None but the Brave 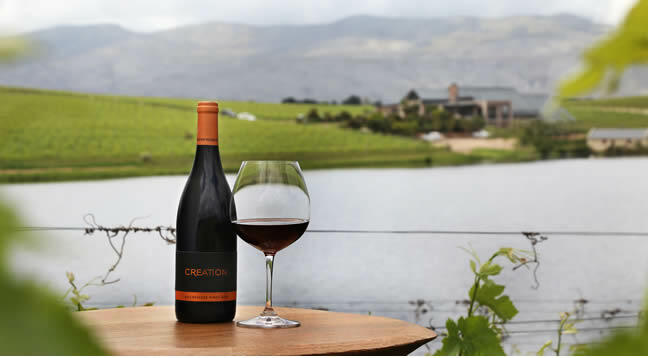 Pinot Noir has a bit of a reputation. To some winemakers it is even known as the ‘heartbreak grape’; infamously difficult to grow and vinify but with the potential to make enchanting wines when grown in the right place and handled with skill. To wine drinkers it is different from other wines, sometimes misunderstood yet much sought-after by collectors and connoisseurs at a premium to other cultivars. To winemakers and drinkers alike it is an enigma, seductive because of its mystery but supremely satisfying when perfected.

Creation’s Jean-Claude (JC) Martin, like many winemakers, agrees that Pinot Noir is tricky. Having qualified first as a viticulturist he is also familiar with the challenges faced when cultivating what can be a fickle grape. The first test when establishing the vineyards on virgin land at Creation on the Hemel-en-Aarde Ridge was selecting the most suitable clones. Now, Pinot Noir is one of the most ancient cultivars with the earliest mention recorded in 1375, but with evidence of its existence stretching back as far as the Roman era, circa 100 AD. Over this time mutations have resulted in a large number of clones with distinctly varied attributes making clonal selection a critical decision. To discover why JC selected clones 115 and 777, click here.

Two characteristics which are found in all Pinot Noir clones in varying degrees are thin skinned berries and small berry and bunch sizes. The small berries and bunches result in a lower yield, and while the potential for quality Pinot Noir generally increases at lower yields so does the cost of producing each bottle, making Pinot Noir a labour of love for many winemakers. Thin skins make the fruit susceptible to external influences – succumbing to mildew and rot in humid and wet conditions, while sunburn threatens in extreme heat. A cooler climate with plenty of sunlight and good drainage combined with judicious clonal selections are thus key to the production of quality Pinot Noir at Creation.

Pinot Noir is an early ripening grape due to the thin skin and the cooler climate of the Ridge results in slow, even ripening. During harvest the thin skins are easily bruised so at Creation hand-picking and a draconian selection process precludes the need for sorting tables and additional handling. Just minutes after being picked the grapes will enter the cellar, which is situated in the heart of the Estate’s vineyards. Pinot Noir is also unique among red wines as it cannot be corrected. When making a Merlot for instance, it is considered acceptable to blend in a small Cabernet Sauvignon component to add complexity or perhaps tannin. Pinot Noir however is so delicate as to exclude the possibility of blending – rather than enhancing the wine it would destroy it.
Despite the challenges Pinot Noir is fairly widely planted, and while the individual plantings may be small it is clear that winemakers (and drinkers) the world over are fascinated by it – wherever wine is made or consumed you will find Pinot Noir in some shape or form. Displaying fresh red berry notes, blueberry, cranberry, subtle spices and vanilla when young, Pinot Noir evolves an astoundingly complex earthiness of truffles, mushrooms and vegetal notes, dried fruit and exotic spices as it ages. The thin skin makes for subtle, elegant tannins and the naturally high acidy ties it all together in one desirable package.

Pinot Noir is considered one of the most transparent and expressive grapes to work with. The indelible stamp of origin and the subtle hand of the winemaker can be read in a good Pinot Noir. It is this inherent eloquence that has led JC to produce a range of three unique and premium expressions of Pinot Noir: the Creation Pinot Noir, the Platter five-star Creation Reserve Pinot Noir and the Robert Parker 92-point Art of Creation Pinot Noir. Click here to visit our online store and purchase these and other wines as well as gifts and accessories.

Creation Wines is proud to announce its participation in the 2015 AfrAsia Cape Wine Auction (CWA) – a global showcase of South Africa’s finest wines and the country’s most prestigious wine brands, in aid of the Cape Wine Auction Trust. The glamorous event, which raised more than R7 m last year, will be held over two days: 13 February with a barrel tasting of inspirational wines at The Dylan Lewis Sculpture Garden in Paradyskloof, Stellenbosch, followed by the auction on 14 February at Boschendal Estate. This initiative will provide bidders with the opportunity to support education within underprivileged communities in the Cape Winelands. Various charities, including the Pebbles Project and Mad Charity will benefit from the proceeds generated by a selection of rare auction items across 34 lots.

The Creation Wines Lot comprises the following:
Seven days for four people in a breathtaking private villa on the Greek island of Skiathos.
A Wine and Chocolate Pairing, a Secret Wine and Food Pairing and a Brunch Pairing for two at Creation.
A private barrel tasting and a personalised tour of the vineyards.
An incredible collection of Creation wines.
A private five-star gourmet dinner at Bona Dea with the Martin and Johnson families.
Two nights for two at Arabella.
A marine experience.
A guided walk with leopard experts.

To place your online bid and show your support, simply register on www.gavelandgrand.com