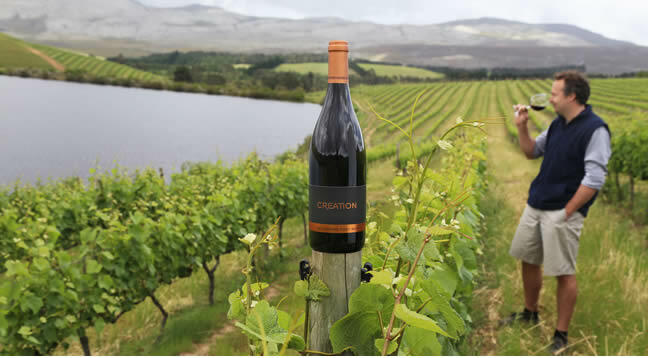 With the second Hemel-en-Aarde Pinot Noir Celebration rapidly approaching, it is the perfect time to take a look at some of the unique aspects of terroir that make our little patch of paradise perfect for Pinot Noir. This week we will be defining the various climatic influences on the growth patterns of the vine.

Of Macro-, Meso- and Micro-Climates
Macro-climate refers to the climate of the region in which the vineyard is situated. In this case it is the temperate maritime climate of Walker Bay, an area receiving approximately 850 mm of rain annually – enough to support unirrigated farming in most instances.

The Meso-climate is the unique combination of factors such as elevation and slope aspect that set each vineyard site apart from others within the same macro-climate. At Creation there is an array of slopes of varying degrees and a variety of aspects that cover most points on the compass. The slope and aspect of a site is vital in terms of the angle of sunlight reaching the grape, number of sunlight hours received and prevailing winds. The farm is just 9 km from the Atlantic Ocean and its cooling breezes, nestled in the rolling foothills of Babylon Toren Mountain where the average temperature during the growing season rarely exceeds 30° Celsius and the elevation of 290 m above sea level contributes to a cool night index of less 12° Celsius at midnight, indicating the difference between day and night time temperatures – a key influence on acid retention during ripening.

The Micro-climate refers to the climatic conditions surrounding individual bunches of grapes. The major influence here is vine modification in the form of pruning, vine architecture and canopy management practices altering airflow and sunlight penetration.

Did You Know?
A clone is a natural mutation of a specific cultivar – if all the shoots or bunches, berry size and looseness of bunches on a vine show significantly different characteristics to the rest of the vines of the same cultivar surrounding it, it is considered a new clone. If these characteristics result in favourable fruit development this clone will often be named and propagated.

Which clones of Pinot Noir can be found at Creation?
At Creation we have selected Pinot Noir clones 115 and 777, known as ‘Dijon’ clones because they were developed by one of the world’s leading viticultural experts, Dr Raymond Bernard of the University of Dijon. Bernard was one of the pioneers of clonal selection – using specific vines of a certain cultivar that exhibited desirable properties such as resistance to pests and disease, specific yields and ripening characteristics, etc to serve as ‘mother plants’ for new vineyards.

Clone 115: One of Dr Bernard’s original clones. Produces smaller bunches, typically with medium sugar and medium to high acidity and yielding well-structured Pinots with a superior bouquet and good tannins i.e. the wine is suitable for ageing.

able growing conditions such as those exhibited by the Hemel-en-Aarde Ridge’s cool summers and long slow ripening. Both 115 and 777 are not susceptible to rot.

These specific clones were chosen because they are predominantly quality focussed – the yields are fairly low and they are planted throughout the Côte de Nuits in Burgundy, where there are heavier soils similar to those on the Hemel-en-Aarde Ridge. This results in a more structured and intense style. These clones are also adapted for quality vineyard sites, well drained sites with good aspects.