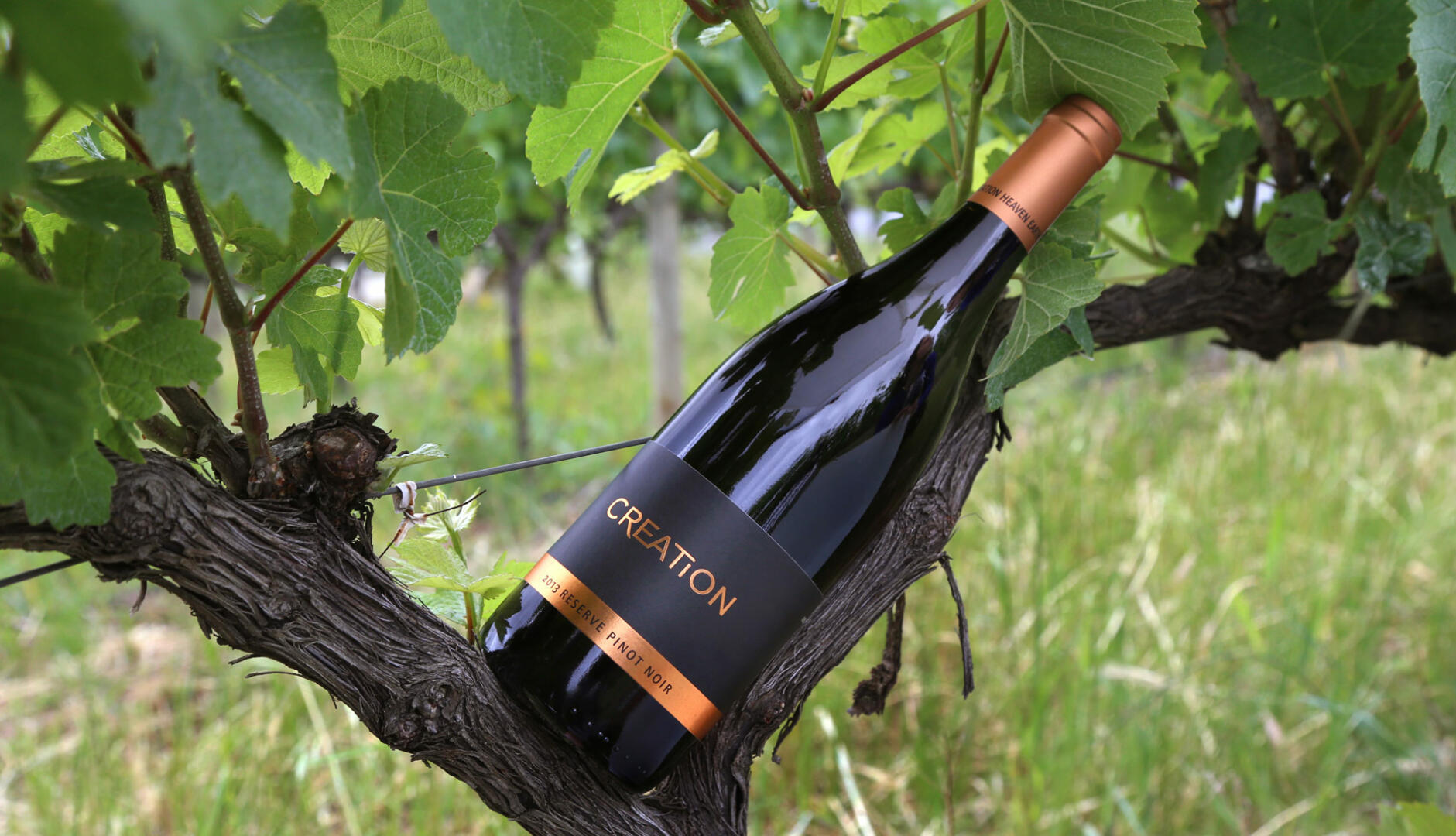 This thin-skinned red cultivar associated with Burgundy seems to evoke passion in winemakers and wine drinkers alike. Pinot Noir has a reputation for being difficult to grow, however that same site specific nature means that it is extremely terroir expressive.

Pinot Noir is one of the most ancient cultivars with the earliest mention recorded in 1375, but with evidence of its existence stretching back as far as the Roman era, circa 100 AD. Over this time Pinot has crossed with other cultivars and is linked to over 150 descendants – many of them widely recognisable such as Chardonnay, Aligote, Muscadet and Gamay. Mutations have resulted in a large number of clones within the Pinot Noir cultivar with distinctly varied attributes making clonal selection a critical decision.

Creation uses Pinot Noir Clones 115 and 777, known as Dijon clones because they were developed by one of the world’s leading viticulture experts, Dr Raymond Bernard of the University of Dijon. Bernard was one of the pioneers of clonal selection – using specific vines of a certain cultivar that exhibited desirable properties such as resistance to pests and disease, specific yields and ripening characteristics, etc to serve as “mother plants” for new vineyards.

Clone 115: One of Dr Bernard’s original clones. Produces smaller bunches, typically with medium sugar and medium to high acidity and producing well-structured Pinots with a superior bouquet and good tannins i.e. the wine is suitable for ageing.

Clone 777: High quality clone that performs well on superior sites, producing small compact bunches and berries with slightly higher sugar than 115. Enjoys stable growing conditions such as those exhibited by the Hemel-en-Aarde Ridge’s cool summers and long slow ripening. Both 115 and 777 are not susceptible to rot.

These specific clones were chosen because they are predominantly quality focussed – the yields are fairly low and they are planted throughout the Cotes du Nuits in Burgundy, where there are heavier soils similar to those on the Hemel-en-Aarde Ridge. This results in a more structured and intense style. These clones are also adapted for quality vineyard sites, well drained sites with good aspects.

Pinot Noir characteristically produces thin skinned berries and small berry and bunch sizes. The small berries and bunches result in a lower yield with a higher ratio of skins to juice – an important factor when producing high quality Pinot. Thin skins however make the fruit susceptible to external influences – succumbing to mildew and rot in humid and wet conditions, while sunburn threatens in extreme heat. A cooler climate with plenty of sunlight and good drainage combined with judicious clonal selections are thus key to the production of quality Pinot Noir at Creation.

Our Latest take on Sideways the Creation Version!

Creation is installing a BosePro Freespace system this week as well as a fabulous playlist created by renowned New York based DJ Tess (South African born). Come and visit to enjoy the coolest vibes and cool climate wines in the Hemel-en-Aarde. Listen to a sound clip below.

Yes! Top South African stand-up comedian, Mark Palmer, is back by popular demand – for one night only. Having built a very successful career in South Africa, this talented Cape Town boy left for the UK in 2012 to pursue a career in comedy in one of the world’s longest running comedy circuits. He was recently invited to be part of The Comedy Club, UK’s Festival of Comedy, where he was described as the very best up and coming talent of UK comedy.

And now you can catch him onstage at Creation on 17 May 2015 for the Creation, Curry & Chuckles Show where his irresistible wit will be spiced up by the delectable curry created by our gifted chef and enhanced by our award-winning wines. Tickets are limited – click here to book.

The very best up and coming talent of UK comedy! – Comedy Club UK

Mark Palmer is one of a rare breed of comedians: he can make you laugh without having to pepper his routine with expletives or venture too far below the belt. He’s great at slice-of-life comedy, and deftly gives a wide range of subjects a sharp nudge in the ribs!” – The Cape Times