Having recently been awarded a position in the Top 100 Wines Challenge, the Creation Syrah represents one of the largest plantings on the Creation Estate which is situated on the Hemel-en-Aarde Ridge in the Walker Bay district.

The blocks are planted on the highest slopes of the farm, facing west; with a north-south row direction, on 450-million-year-old heavy clay derived Bokkeveld series shale soils. Apart from the award-winning single cultivar Syrah, this wine is also central to our well-known Syrah, Grenache Rhône-style blend. Syrah is one of South Africa’s most promising cultivars and one which is growing rapidly in popularity. Having represented 1% of plantings in the early 90s it now represents almost a 10th of all plantings in South Africa, and is the 7th most planted variety world-wide.

Although there have been several theories in the past about the origin of Syrah (stemming from the common usage of the name Shiraz for the Syrah grape in many New World wine producing countries), it has been genetically proven to descend from a crossing that took place in France between two rather obscure cultivars which are no longer commonly used for wine production: Mondeuse Blanche and Dureza. Syrah has since found its ideal terroir in the northern Rhône Valley as well as in blends with Grenache and Mourvèdre further south in the Rhône.

In the vineyard Syrah can be a prolific producer if not managed, being a strong grower with a low susceptibility to disease – although the correct rootstock is essential to avoid chlorosis. At Creation lower cropping clones 22F and 9C were chosen for their restrained production, and being virus free clones (as with all vines planted on Creation) showing no sensitivity to Syrah decline disease.

The continentality that results from the 290 m elevation is a unique feature of the Ridge, differing significantly from the lower lying areas and resulting in a wide diurnal range with a cool night index of 12 degrees. The difference between day and night temperatures during ripening season has a marked effect on the concentration of the fruit and helps to retain natural acidity. Another major influence is the proximity to the Atlantic Ocean, just 9 km away and the presence of maritime influences such as the cooling south-westerly sea breezes and thermic winds that funnel up the valley.

The Syrah grapes are harvested at optimal physiological ripeness, with sugar, tannin and acidity in balance. The bunches are 100% de-stemmed before fermentation, which lasts about 7 days. There is skin contact up to 2 weeks, the wine is then pressed to remove it from the skins and racked into 225 litre French oak barriques, 30% new, with the balance 2nd and 3rd fill, where secondary malolactic fermentation takes place. The wine is racked again until it is clear, and bottled 14 months from harvest.

The Creation Syrah exhibits typical cool climate minerality and excellent natural acidity. Because of the long, slow ripening conditions on the Ridge the tannin structure of the wine is supple without being overripe or jammy, affording it a silky mouthfeel but with the structure to age gracefully. Black pepper, leather and spice are all common flavour profiles traditionally found in Syrah.

The Creation Syrah 2013 impresses with aromas of maraschino cherry and peppery spice interwoven with whiffs of violet. It is lusciously ripe on the silky palate with vibrant minerality to offer exciting complexity. Lingering echoes of anise and clove add to the attraction of a wine that is drinking beautifully right now, but will also age elegantly. The exceptional natural acidity and minerality allow the Creation Syrah to pair harmoniously with dishes that span the culinary spectrum. 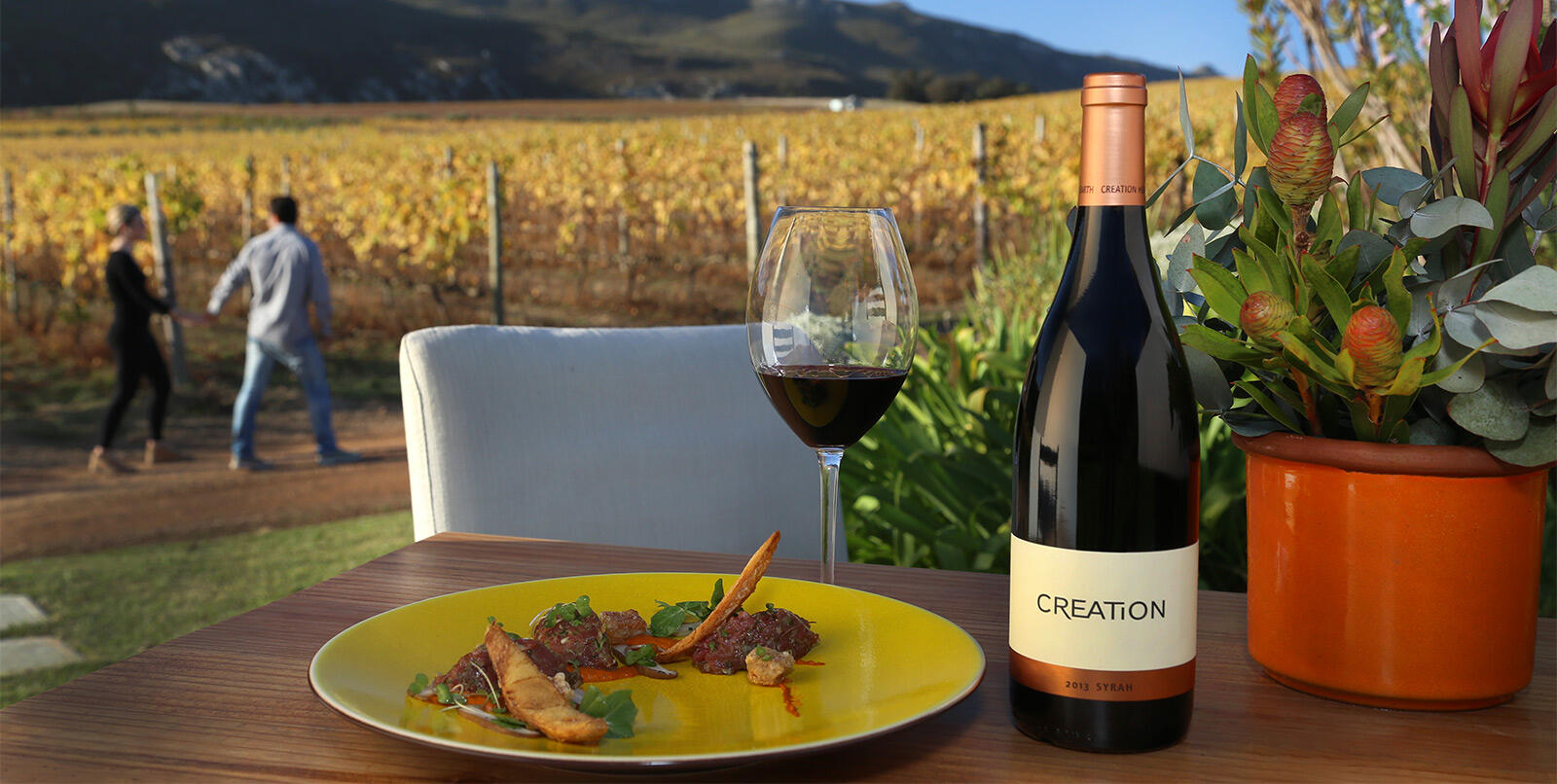 Jean-Claude Martin is interviewed by Jamie Goode on Syrah in South Africa:

Carolyn Martin tastes ready to be bottled Syrah from the tank:

Heart of the Harvest